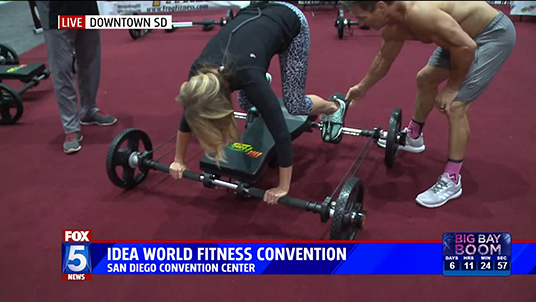 We had the pleasure of promoting the IDEA World Fitness Convention, the “Super Bowl” of the fitness world, here in San Diego. Take a look at this Fox 5 segment we secured. People come from all over the world to take classes from world renown instructors, learn new moves, try out some of the new upcoming equipment and more. They had classes not only at the convention center but also on the USS Midway. Les Mils, Tony Horton and Billy Blank are just a few of the headliners at this year’s convention. We had local, national and international media out there to cover it not only during the event but well in advance to get the word out. We also were able to secure huge stories in the local publications including a big mention in the San Diego Union Tribune’s Night & Day (a special section within the San Diego major daily newspaper). In addition to the local media, we also reached out and secured media from driving markets, LA and Arizona as well as fitness influencers. All in all this was a huge PR and event success.

If you have an event or gala and you want this type of exposure, give us a call 858-794-6974 or email us info@c3publicrelations.com and let’s get the conversation started.